Brad Pitt says he is 'really grateful' to director Ridley Scott and actress Geena Davis for '[giving him] a shot' and choosing him for the role of J.D. in Thelma & Louise.

'I had nothing to show for myself, except for my work as an extra, and they took a chance on me,' explained the 56-year-old actor in an interview published by The Sun on Saturday.

Though he is thankful for his breakthrough role, Pitt admitted that he cannot help but cringe at the 'high voice' he put on for the character.

'I'm more aware of how high my voice is in it. My a** must have been clenched so tight, being the first one,' joked the two-time Academy Award winner. 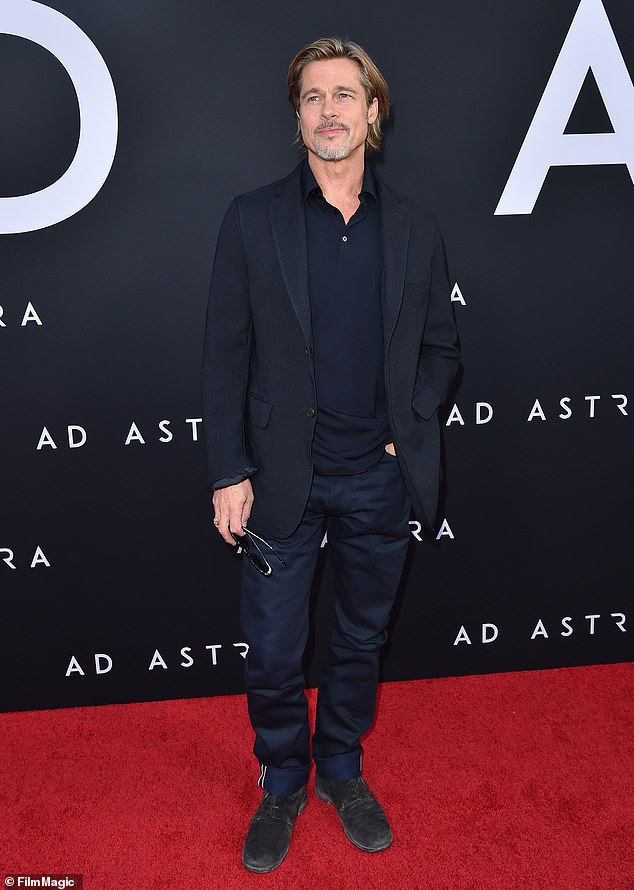 Grateful: Brad Pitt says he is 'really grateful' to director Ridley Scott and actress Geena Davis for '[giving him] a shot' and choosing him for the role of J.D. in Thelma & Louise

Pitt also believes producers of the 1991 film 'were desperate' to cast the part due to its production schedule.

'I think they were desperate, to tell you the truth. They were already shooting because a week later I was on set, working.'

At his final audition for Thelma & Louise, he was going head-to-head with 'five other actors,' one of which was George Clooney.

According to Brad, it was his co-star Geena that plucked him out from the bunch.

Brad officially landed the role in 1990 and the film went on to premiere in theaters in the spring of 1991.

In the lengthy interview with The Sun, Pitt also reflected on his Hollywood come-up and admitted that he dropped out of school and made the move to Hollywood with barely any money in his bank account.

'It was a week before graduation and I realized all of my friends had jobs. I had a friend, who was not even a close friend, who talked about going out to LA and her dad had a place. I loaded up the car. I didn't graduate. All I had to do was hand in a term paper, but in my head, I was done. I was going west,' recalled the Once Upon A Time In Hollywood star.

'I landed and went straight to McDonald's. I got a newspaper. I had $275 to my name, and I saw in the paper that you could sign up for work as an extra, so I signed up for three places.

Brad said that 'within a week' of signing up he was on set 'doing extra work' and 'was really, really happy.'

Although he was proud of himself for pursuing his dreams, Pitt explained that the road to success in Hollywood was not an easy one to navigate.

In order to achieve the seemingly impossible, Brad decided to put himself out on a limb during one of his extra gigs in Los Angeles by uttering an unwritten line.

'I was an extra. It was a big dinner scene and they pulled me out to be the waiter. I was supposed to pour champagne and I thought, 'I'm gonna try it!'

'And so I poured Charlie's glass. They were having a big conversation. I poured the next actor's glass. And then there was a young woman on the end and I poured her glass, and I went, 'Would you like anything else?'

After years of extra work, Brad eventually catapulted to success upon landing the role of J.D. in Thelma & Louise.

He would go on to star in a number or blockbuster films in the 1990s from the crime drama Seven to the critically acclaimed psychological thriller Fight Club.

'We were having so much godd*mn fun on that movie. I don't remember research being the main component. It was just pretty good fun,' said Pitt of his time filming Fight Club, which premiered in theaters in 1999.

Brad also had 'fun' on set of the 2004 war film Troy, although he found his costume to be uncomfortable.

'I was in a skirt — leather. It was chafing. But that was just fun because it was aggressive. There was a lot of action and a lot of physicality. We had some great guys that developed the fights. It was fun.'

Brad also recalled a time in his career when he regretfully asked director Guy Ritchie 'if he could work with him on his 2000 film Snatch.'

'I saw [Ritchie's film] Lock, Stock And Two Smoking Barrels so I called him up and then panicked until the moment we were shooting,' said Pitt.

'I was supposed to be on set at 6am and I was living in North London and I was walking the streets like a maniac,' explained the Mr And Mrs Smith star.

'Literally at midnight I called and woke Guy up and said, 'Are you OK if you can't understand your beautifully written dialogue?'

Even with so many films under his belt, Brad admitted that he did not view himself as a 'professional actor' until he play Jesse James in the 2007 film The Assassination Of Jesse James By The Coward Robert Ford.

'I've had some different junctures along the way where I would actually call myself a professional actor. Once Thelma & Louise hit, I tried some different things and then, around 2004, with Jesse James, I started making things more and more personal. Around then, I probably could have called myself somewhat professional,' said Pitt.

As for his missed opportunities, Brad said: 'If we were doing a show on the great movies I've passed on, we'd need two nights.'

Though he always had his sights set on show business, Brad revealed that after watching the film All The President's Men he felt drawn to the world of journalism.

'I had loved All The President's Men, and so the idea of investigative journalism appealed to me.

'I just started finding myself being drawn more to design and maybe magazine layout or something, but I'd always had a love for film.'

Brad told The Sun that 'in recent months' he has developed a passion for sculpting - something he has since gotten his Once Upon A Time In Hollywood co-star Leonardo DiCaprio into.

'Leo's good as gold. I don't know — somehow that turned into a Ghost moment with me and Leo at the pottery wheel.'

In February, Pitt took home the Academy Award for Best Supporting Actor in a Motion Picture for his portrayal of the character Cliff Booth in Quentin Tarantino's 2019 film Once Upon A Time In Hollywood.

As for all the praise he has received for his second Oscar win, Brad admitted that it has been 'really fun' for him to experience, again.

'It's been really fun. It's really fun when your number comes up. I look at it this way — kind of a wheel of fortune — and there's so much good work every year.

'It's so nice to see your friends go through this and then it's nice to be here myself. So I have a lot to be grateful for.'

By CARLY JOHNSON FOR DAILYMAIL.COM